The Shan Shan Festival is Tottoris largest and most popular festival, held in summer from August 13 to 15 every year.

The name "Shan Shan" is an allusion to the sound of the water of the natural hot springs bubbling below the city center, as well as to the ringing sound of the bells hanging from the colorful paper umbrellas.

The "Shan Shan Umbrella Dance" is based on the traditional "Inaba Umbrella Dance", passed down in the eastern part of Tottori Prefecture. The dance is simplified for the festival, so that anyone can easily perform it.

The hightlight of the festival is the umbrella dance parade, locally known as "Issei Kasa Odori", performed on the 14th.

The Tottori city center is colored in the bright patterns of the Shan Shan Umbrellas, while there are as many as 4,000 people dancing in the "Issei Kasa Odori" parade. Seeing everyone perform the dances in sync is the most fascinating feature of this festival. 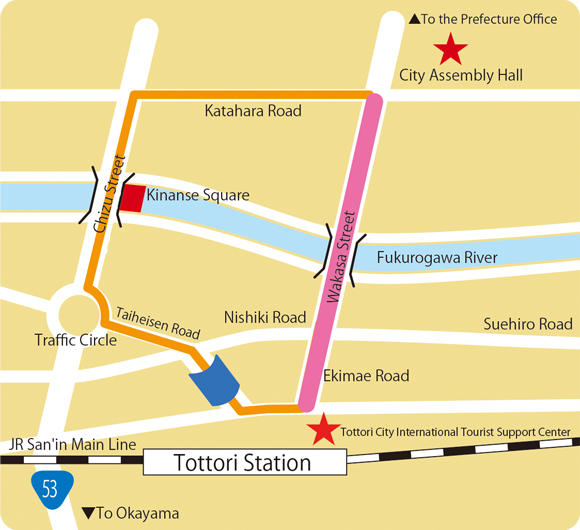 *The dance parade is passing along the pink and orange marked streets.
*The fireworks display will be held at a different location.